Posted on June 11, 2010 by thecontinentalcat

The early 1970’s gave birth to Blaxploitation. Story has it that the term Blaxploitation was originally coined by an African-American who had a falling out with one of the producers of Super fly. The term for many years had a negative connotation and represented the typecasting that was associated with many of the films that were produced during this era. The term has actually evolved into a more positive one as of late, and is used to describe this unique film genre which lasted from (1971-1976). In retrospect many of these films were not only highly entertaining but were often socially ground breaking.  African-Americans for the first time were acting, writing and directing their own films. The genre has been a great influence on such contemporary directors such as Quintin Tarantino ( Pulp Fiction & Jackie Brown).

Take for instance Sweetback’s Baadasssss Song (1971) Directed by Melvin Van Peeples. He not only directed the film, he starred in the lead, edited, financed it and self marketed it.  All that is quite impressive but what really makes this film stand out is that it was made for approximately $500,000 and grossed $15 million.  Other highly successful films were soon to follow, Shaft (1971), Coffy (1973), Black Caesar (1973), and Foxy Brown (1974). By the way Coffy starring Pam Grier is personally my favorite film from the genre. Grier is at her best, equally dangerous as she is sexy. 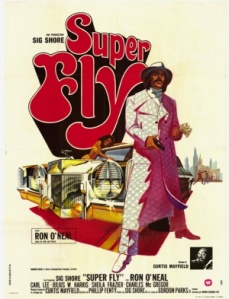 Super fly (1972) actually was the first film to push the Oscar Award winning film the Godfather from the #1 spot.